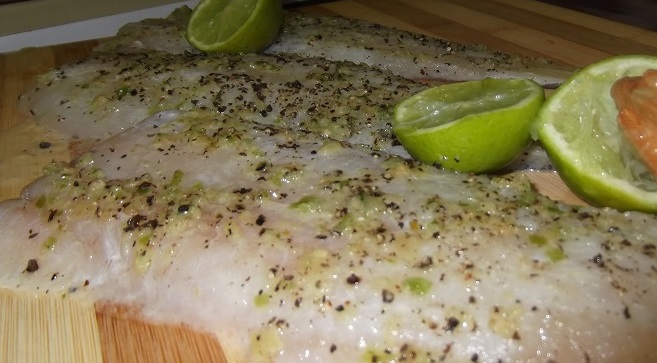 So I took out a tray of yummy looking fish from the freezer convinced that it was sole fish. And I harped on all day about making sole food….

Boy, was I disappointed when I saw that it was hake….(felt pretty stupid, but then I thought, “Why the heck don’t the fish shop people label it saying “HAKE” for us silly people who can’t tell the difference when the white fish is gleaming at us from the freezer?” I think subconciously I reckoned that because I couldn’t see the bulge of the middle bone, it was just a lekker fat fish…hahaha..WRONG!!)

Now, MK says he HATES hake, yes he actually used the word “hate” which I think is way too powerful a word to ever use in general, let alone with regard to glorious food. So ya, small problem, flutter eyelids and start pleading!

He ate it, with half a smile, thankfully 🙂

I devoured it because I thought it was delicious and simple….I could also have just been really REALLY hungry.

I rubbed the hake with green chilli (lots of it), garlic, salt and pepper and I squeezed over some lime juice.

Fried it on medium heat in garlic butter. I fried the skin side down first, then flipped it and flipped it one last time to brown the skin more. This was probably NOT the way you are supposed to do it. But I did, so bleh…and it worked out just fine! 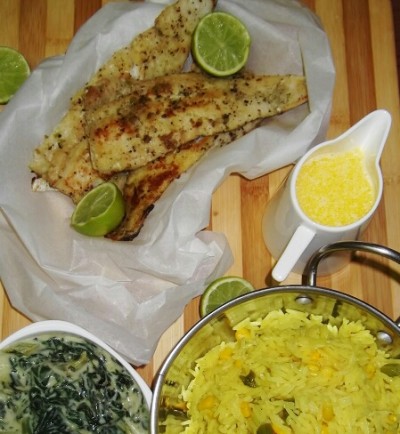 And to accompany it, I made some spicy brown rice, they (that’s my excuse for not knowing where I read it or heard it) say that brown rice is gluten free….win!

So I added turmeric and salt to my boiling water, threw in about a cup of brown rice and let it cook.

When it was about half way done, I added a cup of frozen mixed veg.

Drain your rice when it’s 90% done. Add it back in the pot to steam, stir in lemon pepper, lime juice, aromat and spice for rice.

I pour lemon butter sauce over everything, so my rice and hake were swimming in it. Delish!!! 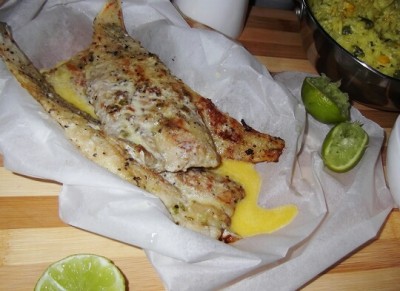