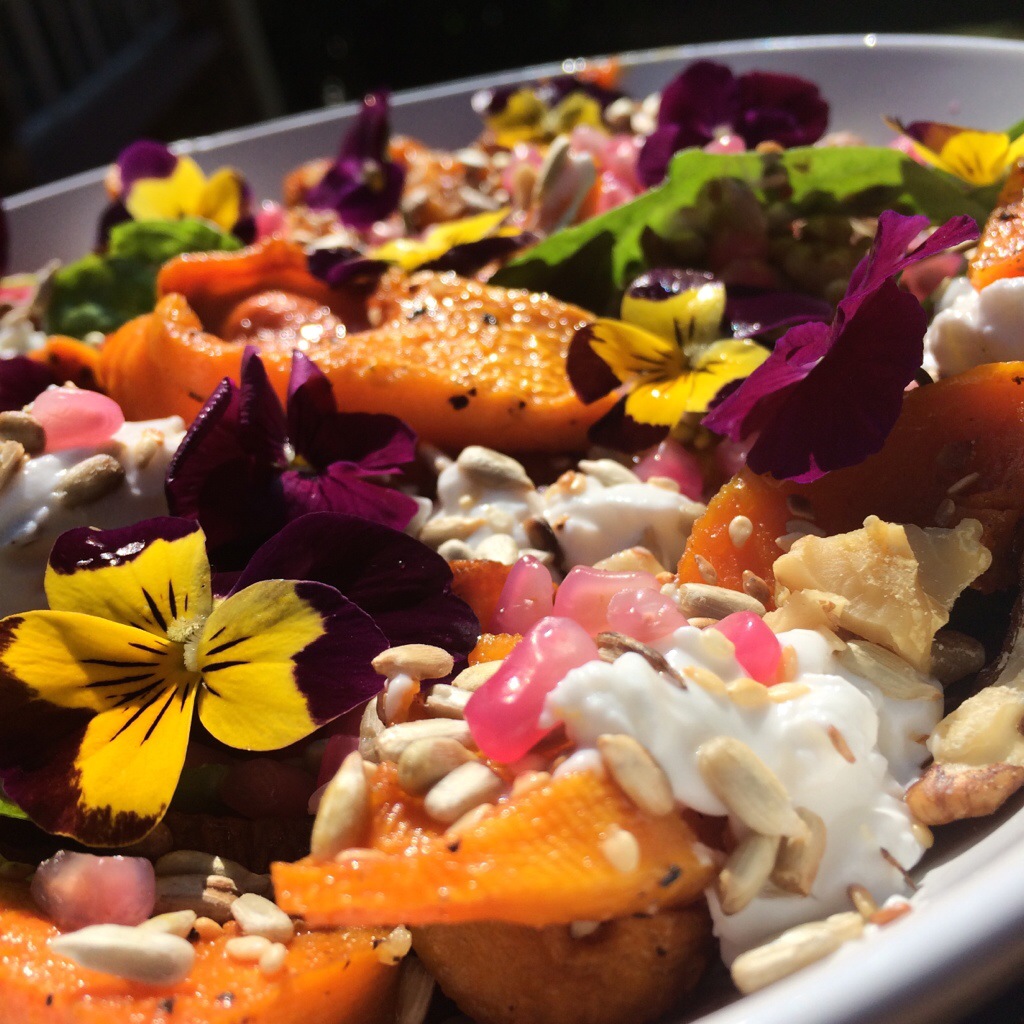 It’s time for a website overhaul…it’s been more than a year and the blog has evolved into more than just food, it’s a piece of me…a little bit of Fehmz, loving life one spoonful at a time.

That said, it will never stop being about food! How can it…when food is my everlasting love??! So bare with me, coz I have a terrible procrastination bug sometimes…but in time we are going to look a little different…and eventually I’m hoping a lot different!

My sister gifted me the cutest mini butternuts, as oulik as they were, what a mission to peel!

Next time I am just gonna slice in half and fill with creamed spinach! But this time, we had a picnic in the work so salad it was. 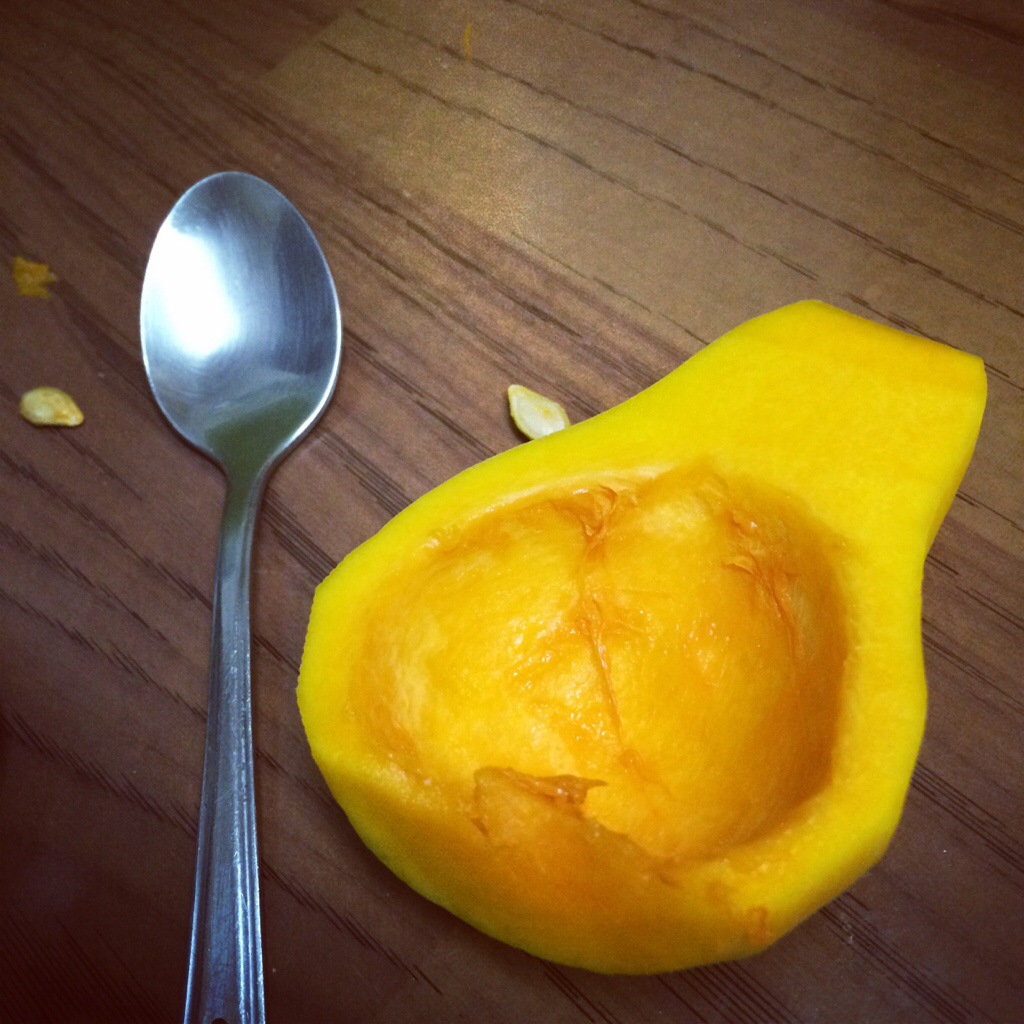 Peel, slice and dice 2 big butternut – you want about 4 cups or more…up to you!
Toss with pepper, salt, lemon pepper and thyme. Drizzle with olive oil
and roast in a 180°C preheated oven. 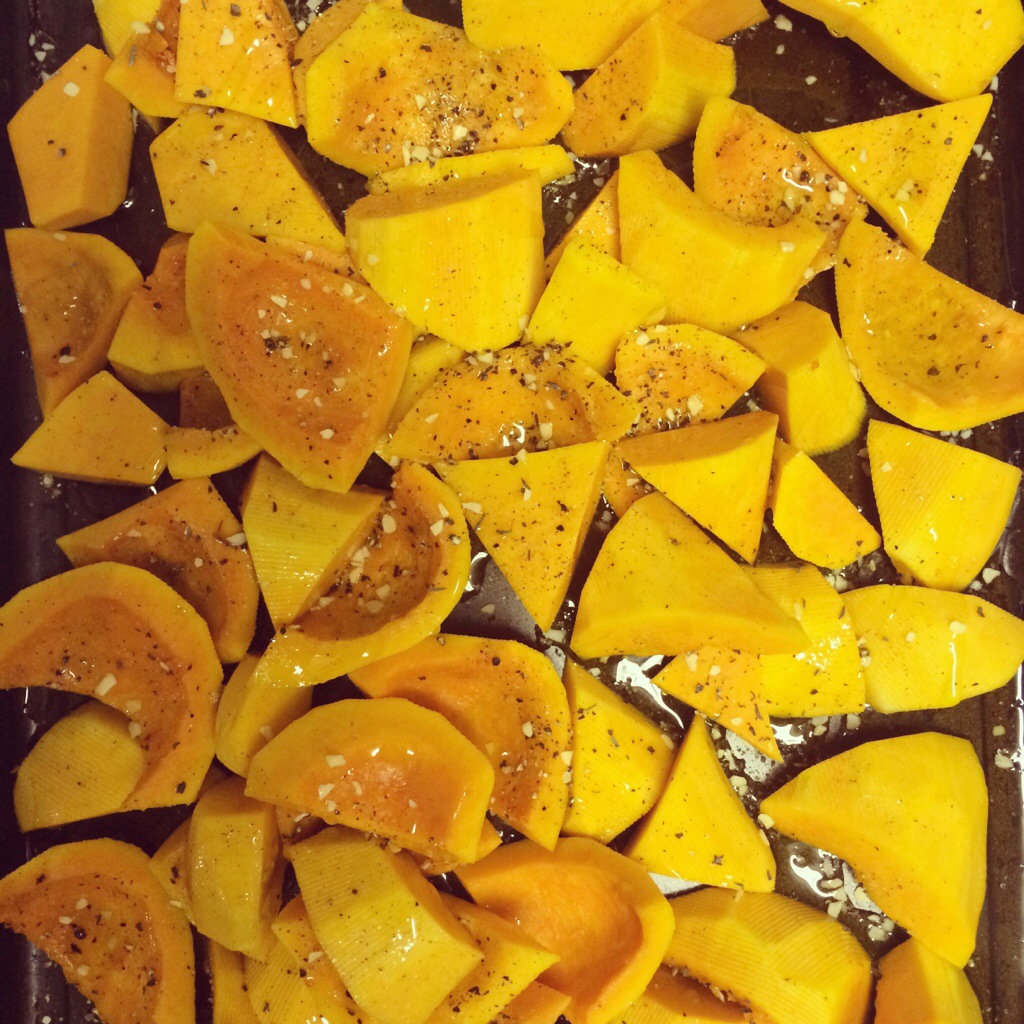 Edible flowers (such as violas, pansies, roses….please google to ensure that you are using edible flowers…else it’s tickets to you! well not quite, but be careful!)

Red onion slices (I didn’t have any either)

Sprouts (if you have on hand)

I am not a big fan of salad dressing but if you simply cannot live without salad dressing then a light mix of mayo with some Greek dressing, mustard powder and sweet chilli sauce would be a lovely accompaniment. I like mine plain jane ♥

Once the butternut is roasted, leave it to cool completely. I refrigerated it that night and assembled the salad just before leaving for the picnic. I used a simple plain white salad bowl, and then all you gotta do is gooi or arrange (or toss…tossing sounds like so much more fun!!) everything in a platter reserving the edible flowers until the very end. 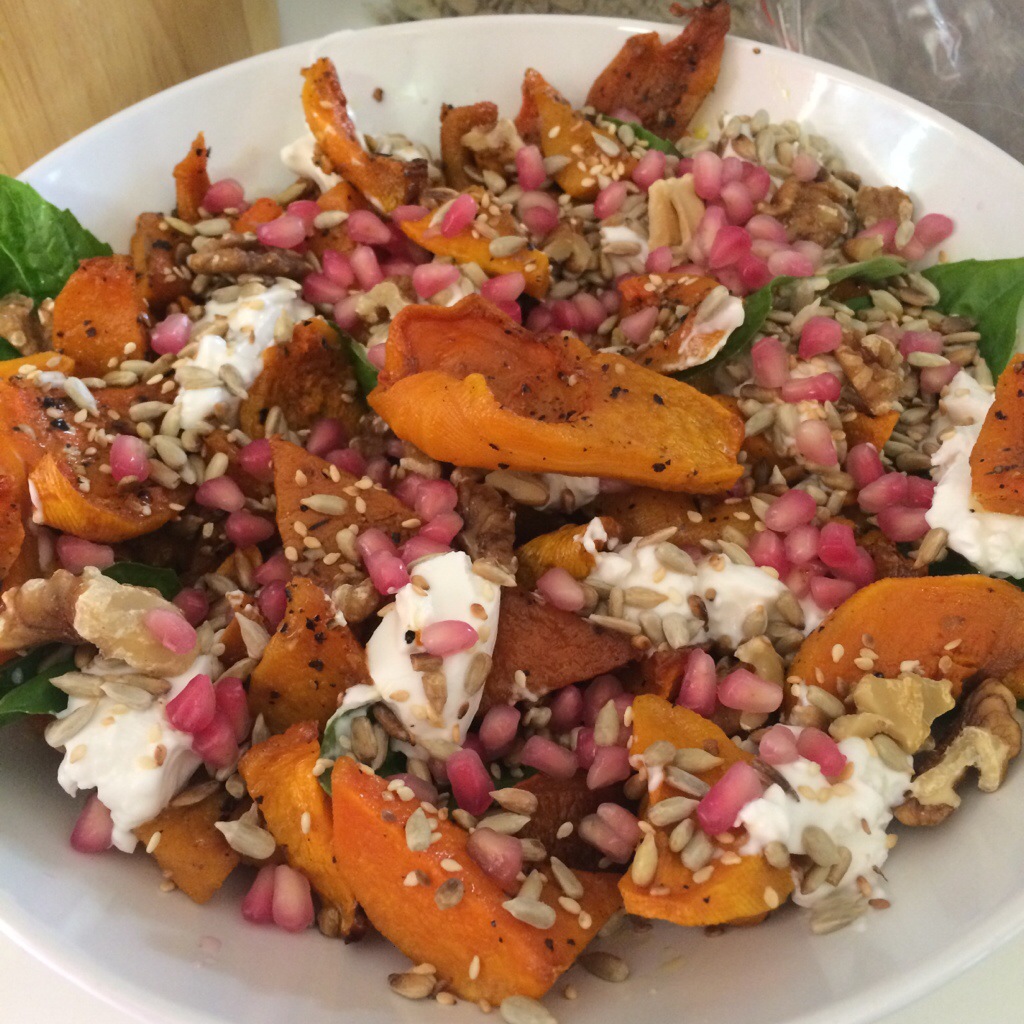 Quick tip, the above pic was taken inside my house (which is a little dark) on a very sunny day…and the next was taken outside. The sun makes everything sooooo pretty!

Sprinkle with a bit of salt&pepper. Arrange the edible flowers on top and you’re done! Et Voila! 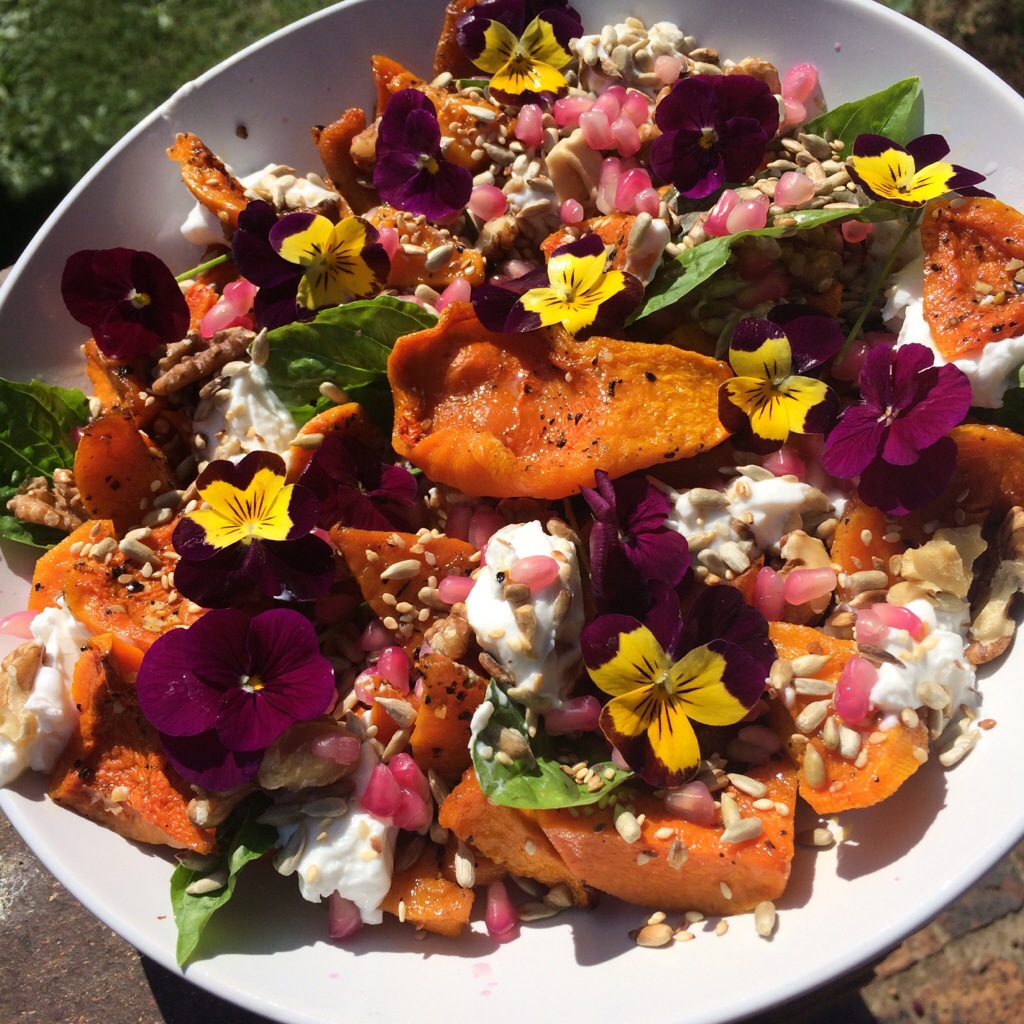 And even though my salad is done…sometimes we (yes, we! I refuse to take the blame all by myself) run late anyway coz we too busy figuring out what to wear and forgetting half the stuff that needed to be packed into the car!

So here’s my late face…waaaa! 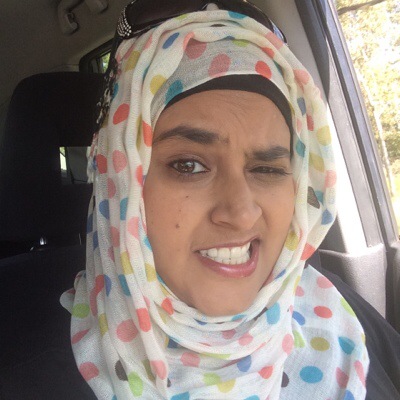 And off to the picnic we went…turns out EVERYONE was running on Indian time so technically we were on time. 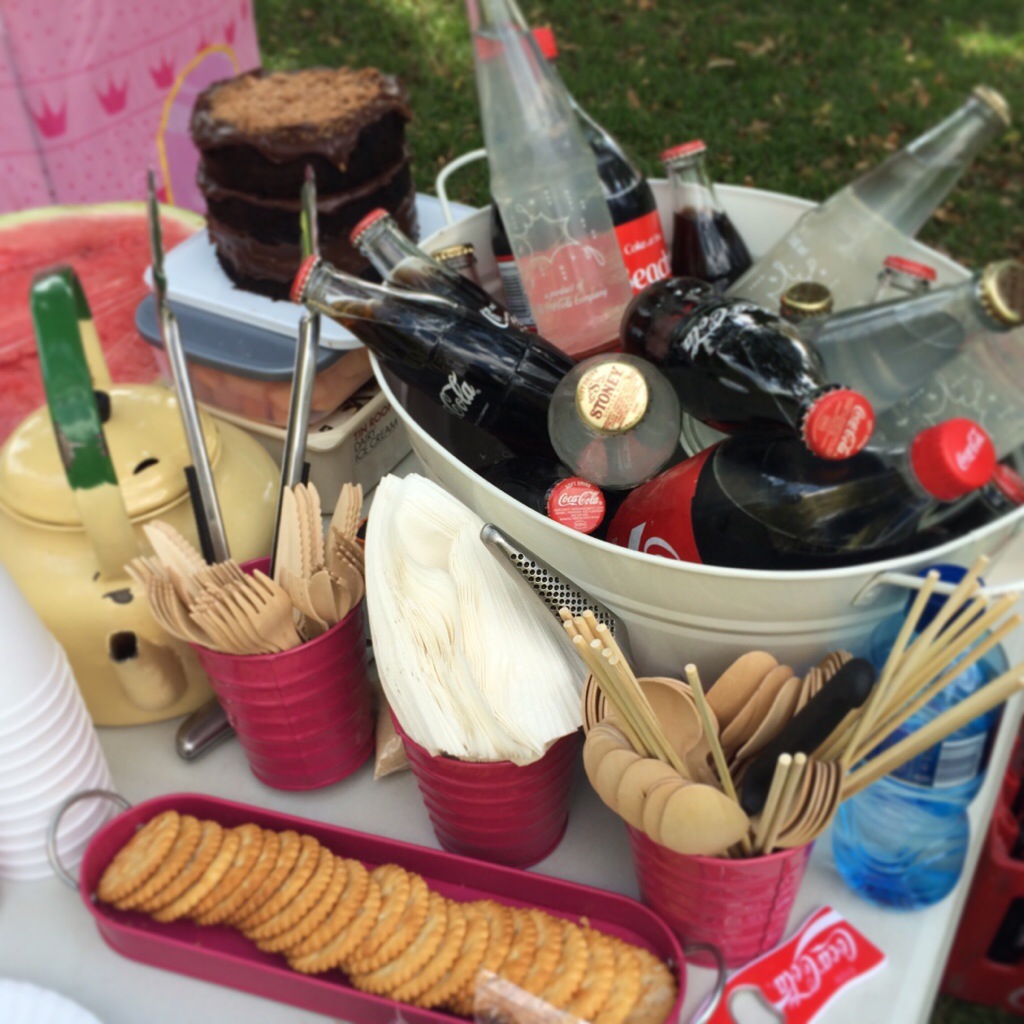 Check that old enamel teapot? It’s the stuff memories are made of, my mum has had it for-ev-er! and she passed it on to me, in my single days it came along to MANY an outing/get together/sleepover and holiday. It’s been there through everything…like how people have their childhood blankies…we have our young adulthood teapot…hahahaha
Did I forget to mention that there was a naked three layer choc cake?? Well…there I said it! And you probably saw it on Instagram too ♥ this is my Moist Choc Cake recipe sandwiched and topped with chocolate ganache. Try it! 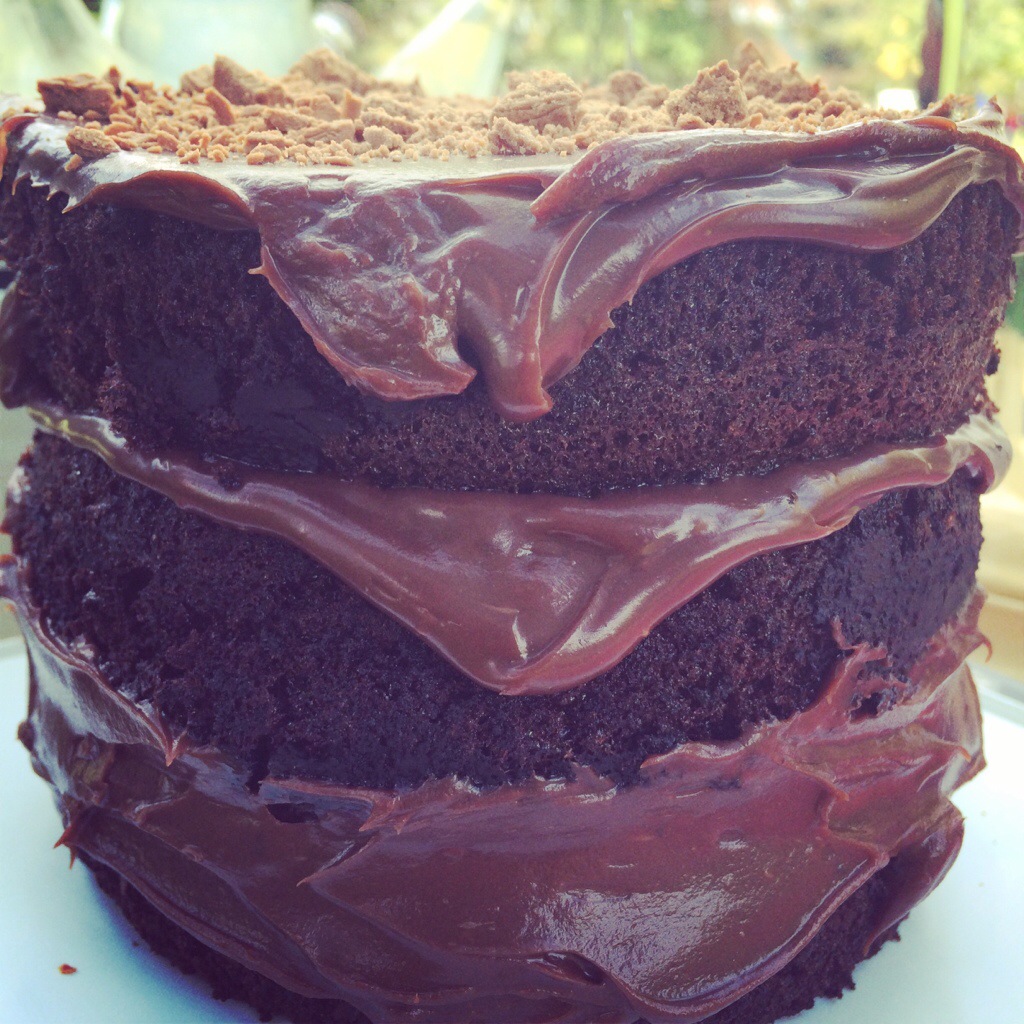 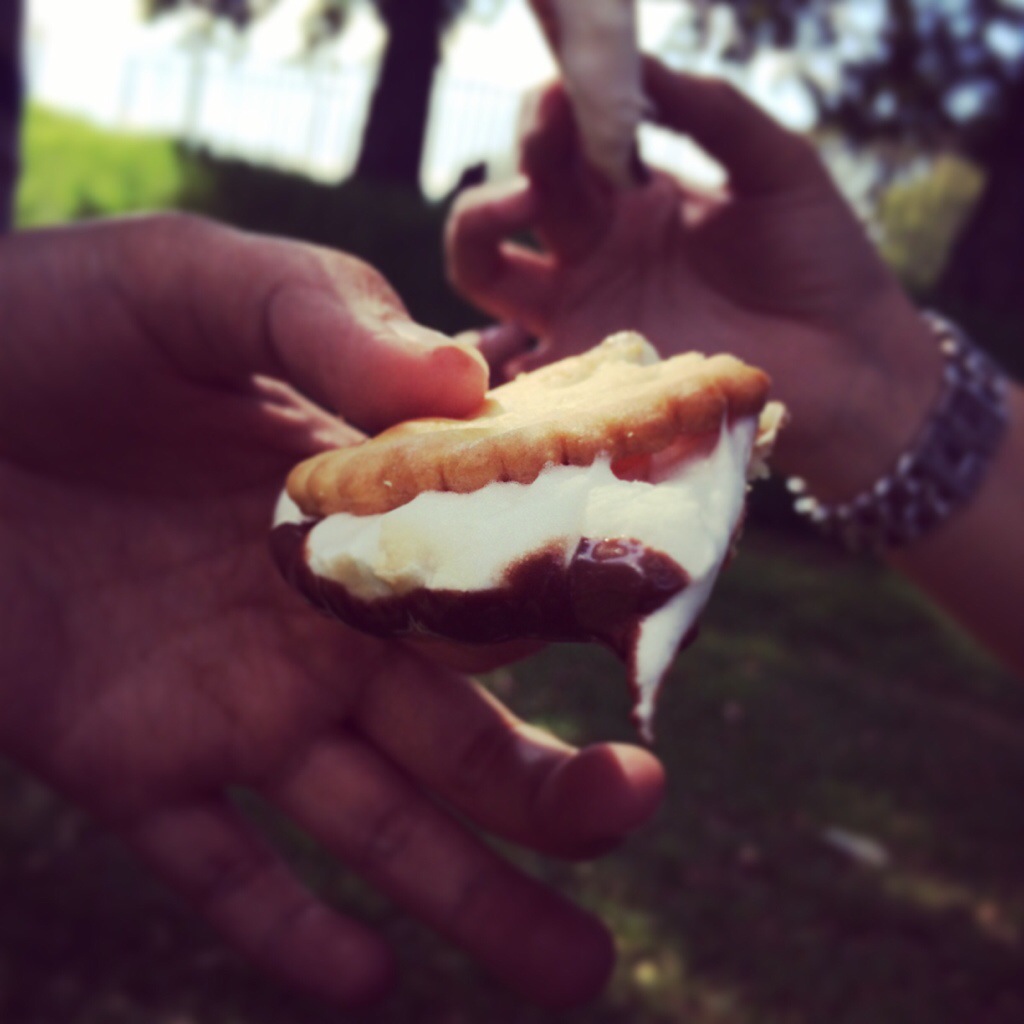 And I had a ton of fun..especially being called into the kiddies tent to play…one big adult and three small kiddos…claustrophobic much? Glad they think I’m still cool! 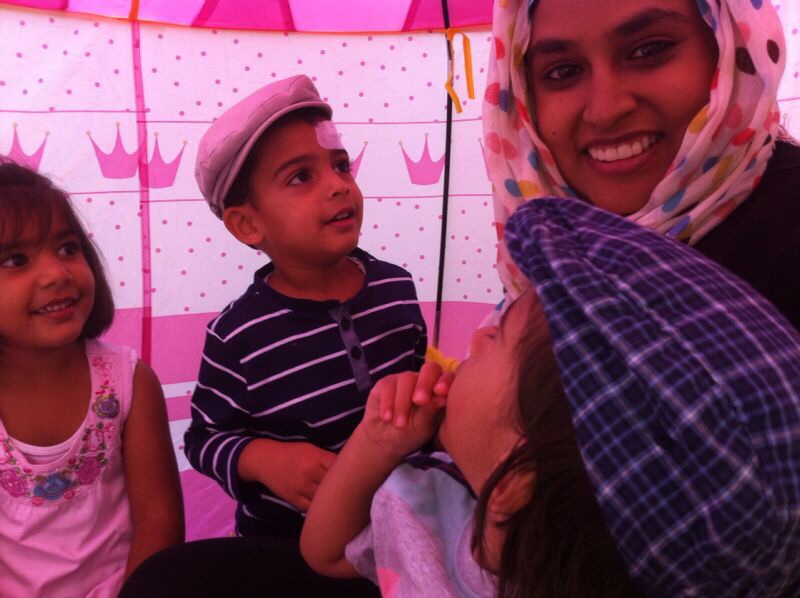 And that’s about all folks!!